The biggest news on Tuesday night was NFL star and Minnesota Vikings running back Dalvin Cook being accused of assault, battery and false imprisonment by ex-girlfriend Gracelyn Trimble, a sergeant in the U.S. Army.

According to the Star Tribune of Minnesota, Trimble filed a lawsuit on Tuesday alleging physical and emotional abuse. She is seeking unspecified monetary damages and, as she says, accountability.

Cook’s attorney, Dave Valentini, has a different version. As per the Star Tribune, Valentini said his client was assaulted by the woman after she broke into his residence, saying in a statement Tuesday night that she later tried to extort him of millions of dollars.

Photos of Sergeant Gracelyn Trimble Who Has Been IDed as Woman Who Allegedly Broke Into Dalvin Cook’s House With Stolen Garage Door Opener, Maced Cook and Then Beat Him Up; Cook’s Agent Explains How She Tried to Extort Him For $1 Million (Pics-IG) bit.ly/3bYi1KA

Photos of Sergeant Gracelyn Trimble Who Has Been IDed as Woman Who Allegedly Broke Into Dalvin Cook’s House With Stolen Garage Door Opener, Maced Cook and Then Beat Him Up; Cook’s Agent Explains How She Tried to Extort Him For $1 Million (Pics-IG) bit.ly/3bYi1KA https://t.co/Xih0lv8x0H

A video released by Black Sports Online on Tuesday allegedly shows Trimble threatening to pull her gun at Cook. Black Sports Online also reports that “Trimble states she did grab a gun, but it was for protection. Whatever happened the next day, Cook took her to the airport, and they continued to hook up. Eventually, they broke up, and that is when she decided to sue him.”

NOTE: The video below contains NSFW language and mention of weapons 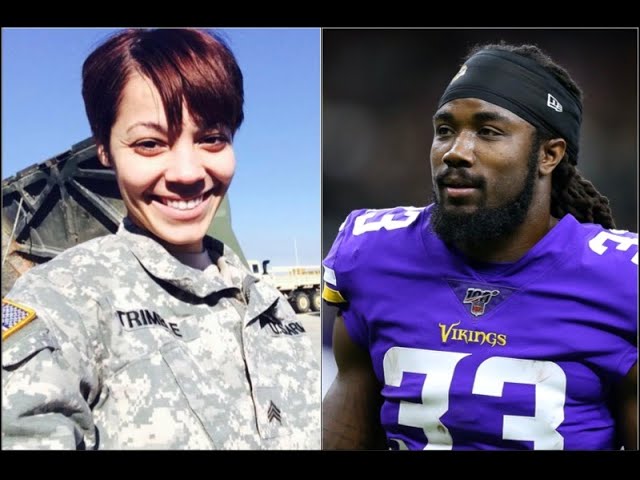 The authenticity of this video cannot be verified. The person filming the video can be heard saying “Grace” right at the end; however, there’s no way to corroborate the person in the video in blue jeans is Gracelyn Trimble.

Trimble claims she suffered a concussion and was left with a scar on her face. Cook, on the other hand, accuses Trimble of extortion and says that he was the victim of domestic abuse, according to his agent Zac Hiller. There’s current litigation on the matter, and the league is also investigating Cook’s actions.

While it’s not possible to confirm the veracity of the video as of now, it’s still a disturbing image to see someone threatening to pull her gun at another person. Black Sports Online has also reported that Trimble is suing Dalvin Cook for $13 million.

ONE Championship channel for ONE: NEXTGEN II