Dana White was thoroughly entertained by the barnburner between Max Holloway and Yair Rodriguez on Saturday.

In awe of the featherweight duo’s fighting abilities, White said the UFC Vegas 42 main event was one of the best fights he has ever seen.

After five rounds of back-and-forth action, Holloway had his hand raised via unanimous decision. The three judges scored the contest 49-46, 48-47 and 48-47 in the Hawaiian’s favor.

Speaking to reporters at the post-fight press conference, White said he was surprised to see Holloway fight through the heavy second-round leg kicks from Rodriguez.

“Insane. One of the best fights I’ve ever seen. And the fact that Yair was off for two years, comes in and puts on a performance like this is unheard of. It was incredible. And then Max… I didn’t think he was going to make it out of the second round with the calf kicks and he made it into the fifth round like he’s probably not gonna be able to walk out of the octagon by himself. But he’s walking around back there like nothing even happened. He said his leg is fine.” 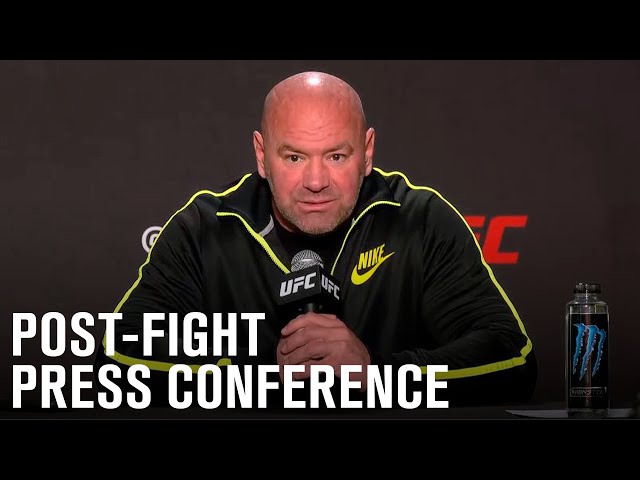 Dana White comments on what’s next for Max Holloway

Although Dana White denied discussing who Max Holloway will fight next, he did seem positive about booking the trilogy fight between ‘Blessed’ and Alexander Volkanovski.

White suggested the featherweight champ may have to fight Holloway for the third time since their UFC 251 rematch had a razor-close result.

“[Max Holloway] just comes in and puts on a performance like this. He’s the guy that [Alexander] Volkanovski is gonna have to just get him out of the way and do it again.”

Holloway has also been teasing a fight against Conor McGregor. The 29-year-old hasn’t shied away from hinting at a potential transition to boxing either. White, however, denied commenting on both the possibilities.

Holloway and McGregor fought each other for the first time in 2013. It was the Irishman who emerged victorious via unanimous decision.

McGregor took a dig at Holloway moments before his fellow former featherweight champ’s clash against Yair Rodriguez. Following the UFC Vegas 42 main event, ‘Blessed’ made sure to return the favor.

Alexander Volkanovski, Islam Makhachev, Francis Ngannou and others react to the striking war between Max Holloway and Yair Rodriguez

The Netherlands vs Norway prediction, preview, team news and more

How to get ‘Glow and Behold!’ advancement in Minecraft