“Has Steph Curry overtaken LeBron James as the basketball icon of this generation?”

Golden State Warriors guard Steph Curry will have the NBA record for career 3-pointers, set by Ray Allen, soon enough. Curry, who averages 5.5 3-pointers per game, is at 2,964. Allen, who retired in 2014, is at 2,973. It’s only a question of when. Perhaps in Saturday’s game at the Philadelphia 76ers?

Stephen A. Smith has however raised a new question, as Steph Curry solidifies his status as the best shooter in NBA history. 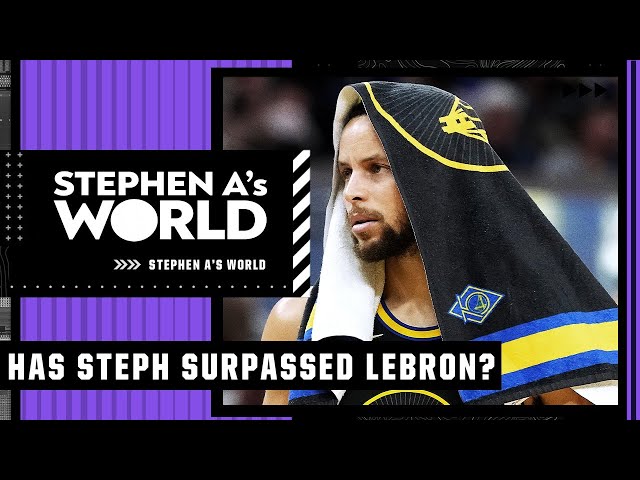 Has Steph Curry overtaken LeBron James as the basketball icon of this generation?

Over the years, LeBron James has been compared to Michael Jordan in the discussion of the greatest of all time. He has been the face of the NBA and a possible contender to MJ, due to the role he has played in the league.

“For years, we’ve compared LeBron and Michael Jordan. Can LeBron equal or surpass Jordan’s impact on the game? His rings. How will LeBron’s legacy be compared to Michael Jordan’s?”

While acknowledging LBJ’s talent and undeniable impact, Smith provides a new train of thought, suggesting it may be time for the conversation to move on to whether or not Curry is the basketball icon of this generation, surpassing King James.

“…so maybe the question we should start asking is this: Has Steph Curry overtaken LeBron James as the basketball icon of this generation?”

His point hinges on the possibility of Curry and the Golden State Warriors winning the title this season. That accomplishment will have the “Baby-Faced Assassin” matching James with four rings. With Curry, who will turn 34 in March, being on a better team, he could go on to win more titles. James will turn 37 in a few weeks.

“As great as LeBron James is — and he’s a legend, don’t get it wrong; he’s on basketball’s Mount Rushmore for crying out loud — but if Steph Curry and the Warriors win the title this season, Steph will have as many rings as LeBron James. He will also be in the position to win more rings than LeBron James on a Warriors team that’s simply better than the Lakers. And better positioned to compete for championship long term.”

If Curry finishes his career with more championships, plus his all-time 3-point record and his impact on revolutionizing long-range shooting, Smith suggested the comparison shouldn’t be between LBJ and MJ. Smith said, at this point, the conversation should be Curry’s legacy versus Jordan’s.

"Never! What advice he gonna give him?"

How to complete the Chase Your Dreams SBC?