How do the battle royale games compare against each other?

PUBG New State and Free Fire MAX are two games that garnered a lot of attention when the games were in the development stage. Free Fire MAX was released on September 28, 2021 and PUBG New State’s global launch took place a few hours ago.

Both are extremely good battle royale games that have huge player bases. These games are quite different from each other. Hence, comparing them will give potential players a clear picture which would help them in deciding the game that they want to play.

How are PUBG New State and Free Fire Max different from each other?

How do they compare over their predecessors?

PUBG New State is not exactly an upgraded version of PUBG Mobile. This game is a sequel to PUBG Mobile and is set in the future. It features different types of graphics, and additional content in the form of various items and UI’s appearance. While it will provide reduced satisfaction, low to mid-end devices can run it.

PUBG New State vs Free Fire MAX: How do the maps compare? 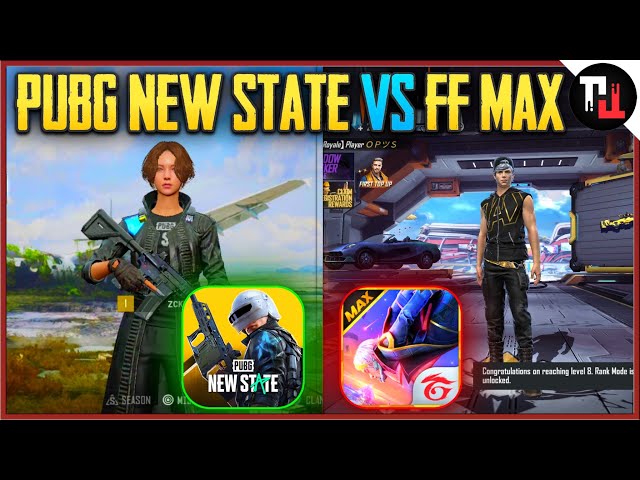 PUBG New State will have players battling it out in Troi, a new map which will cover 64 sq. kilometers. Other than the new map, players will also have a new training ground, a death-match map called ‘Station’, and a reworked Erangel.

One feature that differentiates Free Fire MAX from PUBG New State is the Craftland mode. This allows free Fire MAX players to create their own maps. This hands over the reins to the community, ensuring higher player participation and satisfaction.

Which game has better graphics?

Graphics and art style are another set of differentiating factors when it comes to these games. PUBG New State utilizes Global Illumination technology for realistic graphics, and offers players a sense of military simulation.

Free Fire MAX, on the other hand, has an art style that tends towards animated and vibrant spectrum. While the graphics are more enhanced than its predecessor, it offers a different take on the battle royale genre than PUBG New State does.

What are the key elements in PUBG New State and Free Fire MAX?

Free Fire MAX is an enhanced version of Free Fire, and therefore, it doesn’t include big changes in the game. The only differences present are in the graphics and skins, i.e. visual appearances.

In PUBG New State, the developers have added futuristic gadgets like drones and tons of interactable objects to the map. This was done in an attempt to enhance the in-game experience, and force players to implement new strategies on the fly.

Another differentiating factor between the two titles is that Free Fire MAX has a Firelink technology, essentially a cross-connect feature. This allows players to play with their friends irrespective of the version they may be using at the time.

Since PUBG New State, however, does not have this feature. While it might be released in the coming months, there is no information regarding it yet. However, since the game was released today, players do not need to be concerned about backwards compatible versions just yet.

Does Seth Rollins have a wrestling school?

“Please make this happen, on my knees” – Liverpool fans go wild after rumours link them to La Liga forward

D’Ernest Johnson as a drop candidate for Week 10