How to obtain Vinicius Jr. Player of the Month (POTM) card in FUT 22?

FIFA 22 has released the Player of the Month for November from another major European league and it features the La Liga POTM, which has been awarded to Real Madrid star Vinicius Jr.

Vinicius Jr. has been an absolute rockstar for Real Madrid in the current campaign. He has made 21 appearances for the Los Blancos and has already made 19 goal contributions. He was a standout performer in the entire league for the month of November.

Our starboy Vinicius Jr is La Liga’s player of the month for November. Congratulations, @vinijr ⭐️

In order to felicitate the wonderful performances of the Real Madrid star, FIFA 22 has made the Vinicius Jr SBC available for all the players of FIFA 22 Ultimate Team. By completing the SBC, every FIFA 22 player will be able to obtain the POTM edition player item of Vinicius Jr. It should be noted that the card is untradeable and is only obtainable from the SBC.

Tasks of the SBC 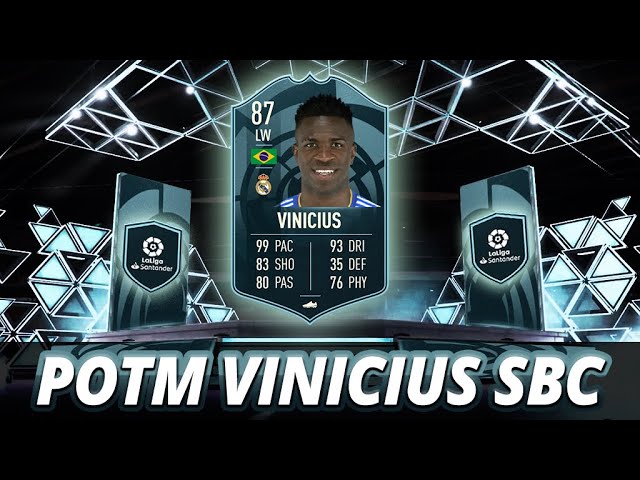 At the time of writing, it’s hard to calculate the exact cost of completion due to widespread fluctuations. Irrespective of the accurate completion cost of the Vinicius Jr. POTM SBC, the final price will be lesser, based on the usage of the existing fodder by the players from their FIFA 22 Ultimate Team collection.

Vinicius Jr.’s POTM card is an 87 rated LW card that has an obscene amount of pace on it. At 99 Pace, there isn’t a faster player item in the entire FIFA 22 Ultimate Team. The player item also has 93 Dribbling and 83 Shooting.

Vinicius Jr. POTM player item is an insanely pro-meta card in FIFA 22 Ultimate Team. However, the SBC is expensive as well, unless the cost of completion comes down. As such, it may be better to settle for the same footballer’s TOTW item, which may be slightly weaker on stats, but the significantly lesser costs will help save a ton of FUT coins.

“This will be a major test”

Edge reveals how he feels physically since his WWE return