UFC 268 delivered one of the best cards of 2021. The pay-per-view was headlined by the welterweight championship title fight between Kamaru Usman and Colby Covington. It also had one of the most exciting preliminary and early prelims cards in recent memory.

The co-main event saw Rose Namajunas take on Zhang Weili in yet another title rematch after Namajunas knocked out the Chinese in their first fight.

UFC 268’s main card opened up with an exciting match-up between Justin Gaethje and Michael Chandler.

Ian Garry def. Jordan Williams via KO (4:59 of first round)

Chris Barnett def. Gian Villante via TKO (2:23 of first round)

Alex Pereira def. Andreas Michailidis via TKO (0:18 of second round)

Bobby Green def. Al Iaquinta via TKO (2:25 of first round)

Chris Curtis def. Phil Hawes via KO (4:27 of first round)

Nassourdine Imavov def. Edmen Shahbazyan via TKO (4:42 of second round)

Ian Garry knocked out Jordan Williams in the first round. ‘The Future’ was also praised for his performance by fellow Irishman Conor McGregor.

The real shocker in the early prelims came in Chris Barnett’s heavyweight bout against Gian Villante. Barnett caught Villante off guard and stunned him with a wheel kick to knock him out in the second round.

CHRIS BARNETT!!!! THE LEADER OF THE FREE WORLD!

CHRIS BARNETT!!!! THE LEADER OF THE FREE WORLD! https://t.co/g7qms3TWy7

Dustin Jacoby, who replaced Aleksa Camur on short notice, secured a unanimous decision win against John Allan. Jacoby’s output was seemingly too much for Allan, who, despite his best efforts, succumbed to Jacoby’s pressure. 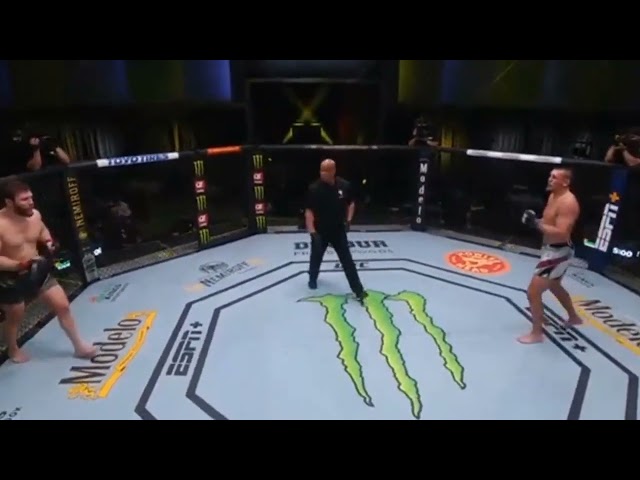 Melsik Baghdasaryan and Ode Osbourne were also successful in their bouts against Bruno Souza and CJ Vergara, respectively. Both fights were won by unanimous decisions.

It started with Nassourdine Imavov fighting middleweight Edmen Shahbazyan. Imavov secured an impressive TKO victory over Shahbazyan in the second round. .

MMA veteran Chris Curtis finally secured the first UFC win of his career. He defeated Phil Hawes via knockout in the first round of their fight.

Not a bad debut for Chris Curtis 😮

Fight to go the distance – No ✅

Not a bad debut for Chris Curtis 😮Fight to go the distance – No ✅(Via @ufc)https://t.co/v2S5xCWJAO

Former UFC title challenger Al Iaquinta took on Bobby Green in the prelims of the pay-per-view. Green proved to be too much for the New York native as he knocked Iaquinta out in the first round.

The preliminary card headliner was a highly anticipated contest. It featured Alex Pereira, the only fighter to knock out Israel Adesanya.

Pereira, on his UFC debut, strengthened his hype train, knocking out Andreas Michailidis via a flying knee. The finish was deemed a Knockout of the Year contender by fans on social media.

To kickstart UFC 268’s pay-per-view, Justin Gaethje and Michael Chandler engaged in an absolute barn burner. The lightweights came into their bout with guns blazing and both were rocked multiple times over the course of the fight.

Chandler was knocked down in the second round by a huge right hand from Justin Gaethje. ‘The Highlight’ took control of the fight and decisively won the third round as well. Gaethje was eventually awarded a unanimous decision victory.

Shane Burgos defeated Billy Quarantillo in yet another Fight of the Night contender. Burgos established technical superiority early in the fight, rocking Quarantillo a few times.

‘Hurricane’ ultimately secured a unanimous decision victory over Quarantillo, owing to his distance control throughout the fight.

Frankie Edgar took on Marlon ‘Chito’ Vera in a bantamweight bout on the main card. The first round saw Edgar take Vera down and control the Ecuadorian on the ground.

After a similar second round, the third round saw Vera showcase the striking difference between himself and ‘The Answer’.

After an even striking battle, where either of the two strawweights failed to make an impact, Zhang landed a takedown in the first round.

Rose Namajunas forced her own ground game on Zhang in the fourth and fifth rounds. ‘Thug’ also landed big shots on Zhang, but the former champion kept her composure.

Namajunas subsequently got her hand raised via split decision.

The main event of UFC 268 saw the reigning pound-for-pound king Kamaru Usman defend his welterweight strap against Colby Covington one more time. The fight was a five-round war and lived up to the expectations of the fans.

Kamaru Usman knocked Colby Covington down twice in the second round.

Colby Covington came back in the third round and landed significant strikes on ‘The Nigerian Nightmare’, seemingly rocking the champion.

The two elite welterweights entered the final round of the championship contest even, according to most fans.