Michael Bisping believes Justin Gaethje “is out of his mind” if he thinks Dustin Poirier will retire after winning the UFC lightweight title at UFC 269.

In a video posted to his official YouTube channel, UFC Hall of Famer Michael Bisping weighed in on Justin Gaethje’s recent comments regarding ‘The Diamond.’ Gaethje claimed Dustin Poirier will likely win the UFC lightweight belt at UFC 269 and retire rather than face him in a rematch.

A true Fight of the Year contender! 🥇

Poirier takes the W after all-out war with Gaethje 💪

A true Fight of the Year contender! 🥇Poirier takes the W after all-out war with Gaethje 💪What. A. Fight 👊👊👊#UFCGlendale https://t.co/A8KyBjFkcI

Michael Bisping addressed this and stated:

“Wow! I mean, that’s a big statement from Justin Gaethje. And Justin’s normally a pretty respectful kind of guy. And, of course, Justin and Dustin, they’ve gone to war before, and Dustin Poirier was the victor. But he’s saying that he thinks that he would rather retire than fight Justin Gaethje again. I disagree with that. I disagree. I think Dustin will be the champ, and I think he’ll take on whoever it is.”

Furthermore, Bisping pointed out that UFC president Dana White suggested the winner of the UFC 268 fight between Justin Gaethje and Michael Chandler will fight for the UFC lightweight title next.

Bisping explained nothing is guaranteed in MMA, adding Gaethje is taking jibes at Poirier to elicit a reaction from him and generate fan interest in their rivalry. ‘The Count’ said:

“But listen, right, Justin Gaethje is out of his mind if he says that Dustin Poirier is gonna go and ride off into the sunset.” Bisping noted that Poirier would earn bigger paychecks, a percentage of the PPV money, and much more as a UFC champion, so he’s unlikely to retire after winning the belt. Bisping added, “As I say, the point is: You don’t retire when you win the belt.”

Bisping highlighted Islam Makhachev is on a nine-fight win streak and has sort of inherited his longtime training partner Khabib Nurmagomedov’s fan base. ‘The Count’ indicated that by talking trash against Dustin Poirier, Justin Gaethje could ensure the fans are more interested in watching him, rather than Islam Makhachev, fight Poirier.

Watch Michael Bisping’s response to Justin Gaethje’s statements regarding Dustin Poirier in the video below: 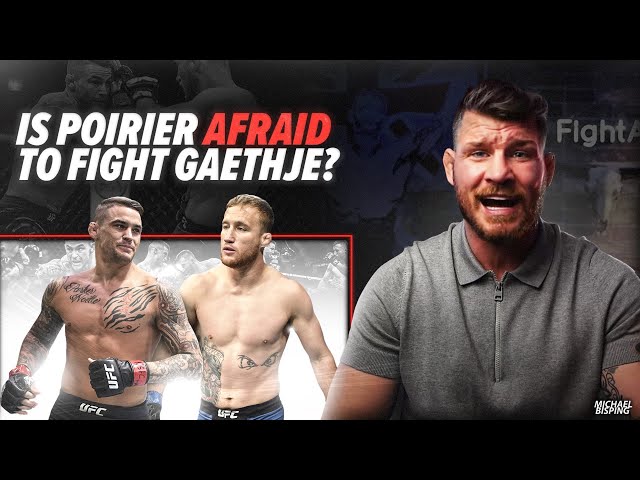 ‘The Diamond’ is a former interim UFC lightweight champion who came up short in his first bid to win the undisputed title, losing to Khabib Nurmagomedov in their title unification bout back in 2019.

If Dustin Poirier were to beat Charles Oliveira, it’d end the Brazilian fighter’s incredible nine-fight win streak. As of this time, Gaethje and Makhachev are the frontrunners to face the Oliveira-Poirier winner for the lightweight title in 2022.

Bears linebacker is now out for the 2021 NFL season