Tom and Tony Cannon finally showcased some glimpses of Project L, the upcoming fighting game by Riot Games, with Jinx and Ekko from League of Legends joining the roster.

The hit Netflix show Arcane, based on League of Legends, has been getting a lot of acclaim and fanfare from Riot fans and newcomers alike. Naturally, fans have been waiting for any sort of news regarding the upcoming free-to-play fighting game. 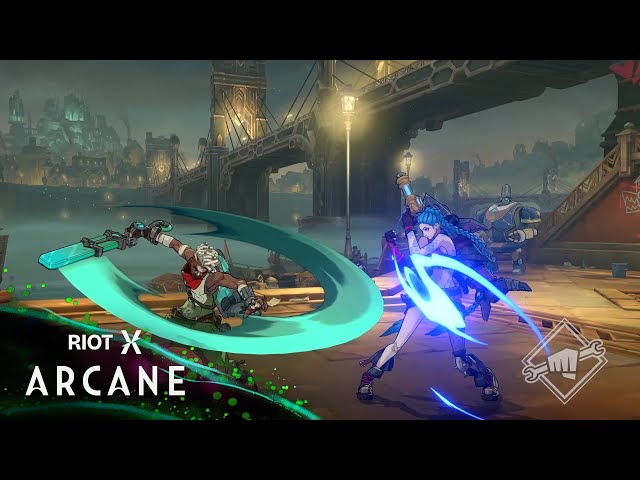 The work-in-progress build of Project L shows how both characters are planned to play. Ekko is seen using his time manipulation abilities from League of Legends into a closer combat-focused environment, while Jinx uses her iconic guns to deal damage to her opponent.

Ekko and Jinx are introduced in Project L

Not much gameplay has been shown around Jinx, with a deep dive into how she is going to play in Project L. The update video does show Jinx using her guns and weapons in combat while also going close and personal with hand-to-hand combat.

The video shows Jinx using her handgun to perform mix-ups in a combo string, following it up with a down-kick and punch. The handguns are also shown to be used from the edge of the map, with the projectile traveling almost full stage, meaning the guns might act as a tool to zone opponents.

Fishbones and Jinx’s iconic mini-gun are also shown in the trailer.

Fishbones, Jinx’s rocket launcher, is shown being able to shoot in mid-air. In other instances, the rockets are shown to have the knockdown ability to hit and might also double down as a combo finisher.

Apart from this, not much is shown about Jinx in the Project L update video, apart from certain combo strings which might be indicative of how Jinx might translate into Riot’s upcoming fighting game.

A deep look into the League of Legends hero Ekko

In episode 7 of Arcane, fans are introduced to the grown-up League hero from Zaun, Ekko. Project L’s update video showed a detailed look into how Ekko’s going to play and perform in the upcoming fighting game.

Ekko, a “punk genius” as mentioned by the development team in the video, uses his invention knowledge and time manipulation ability to outperform his opponents in the game.

Chronos Strike slash can be used to put pressure on the opponent by rewinding back and making a separate move during a block string or mixup. It can also branch into high and mid-range launchers.

Ekko’s time grenade, the Timewinder, is also shown in action. Timewinder can be used for basic zoning and combos. It can be thrown from a range and creates a time distortion field when exploded.

An opponent within range of the time distortion field will slow down for a few seconds, opening them up to attacks.

As per the developers, both of these options are part of their approach to give players tools with a clear primary role, with extra utility when used in the right way and in the right situation.

The announcement has certainly hyped up the fighting game community and even casual players. With Riot’s animated show Arcane wrapping up a successful first season, it is not much of a shock that people are excited to try out more mediums in the Runeterra universe.

Project L is a team fighter thank you Lord 😭🙏

Project L is a team fighter thank you Lord 😭🙏

Project L is an upcoming free-to-play fighting game developed by Tom and Tony Cannon and Riot Games. Although no release date has yet been announced and not much about the game is known, the duo did say that more information about the game is going to start dropping more frequently in the upcoming future.

New Horizons- Everything you need to know