Tom Brady could have been a New York Giants legend

Tom Brady could have been a New York Giant. Before taking Eli Manning to number one overall in 2004, the Giants had a shot at drafting future Hall-of-Famer Brady out of Michigan. In April 2000, sitting at the 177th-overall pick, the Giants did take a player out of Michigan University, but it was not Tom Brady. Instead, they drafted Michigan LB Dhani Jones.

Jones ended up playing 11 years in the NFL, which is twice as long as the average NFL career span of 3.3 years. Post NFL career, he’s gone on to host Dhani Tackles the Globe, the VH1 show Ton of Cash, and is also a host on the CNBC series Adventure Capitalists. But in the end, the New York Giants missed an opportunity to draft the greatest quarterback of all time.

If NFL success is measured in rings (and it is for the most part), Brady has appeared in 10 Super Bowls and won 7 of them. He’s also been Super Bowl MVP in 5 of those 10 appearances. It’s hard to argue with Brady’s success as a quarterback and what he’s meant to all of those New England Patriots teams and currently the Tampa Bay Buccaneers.

How Tom Brady was almost drafted by the New York Giants

In 2000, the Giants just lost the Super Bowl to the Baltimore Ravens with Kerry Collins as their quarterback. They did not have an urgent need for a quarterback, but with the 177th overall pick in the 6th round, taking Brady here would not have filled an immediate need. Rather, taking Brady would have been a long-term investment.

Raymond Walsh Jr., a Giants scout, begged the front office to take Brady as early as the 4th round at 105. He begged them again in the 5th round and especially in the 7th round because he thought taking a quarterback this late in the draft would fill a need at the game’s most critical position without risking too much draft capital.

He saw Brady’s incredible accuracy and poise in the pocket as important reasons to draft him. A quarterback’s accuracy is one of the more important metrics when it comes to how successful they can run an NFL offense. Tom Brady has a career passing completion percentage of 64.1% and a career quarterback rating of 97.6, so Walsh was accurate in his evaluation. 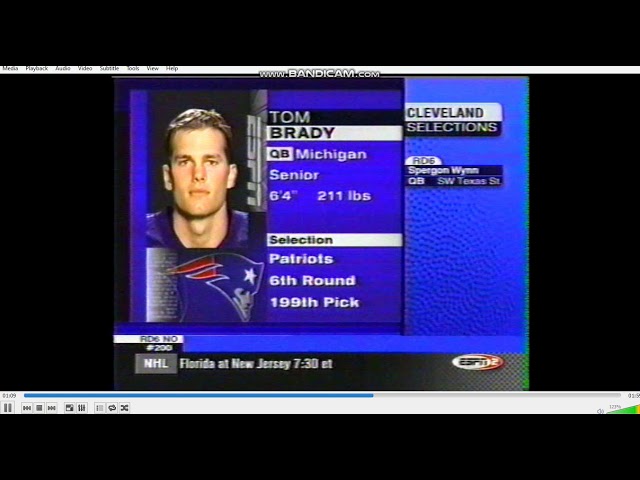 As the story goes, the New York Giants did not take Brady. The New England Patriots would scoop Brady up soon after as the 199th overall (compensatory pick) in the 6th round. The Giants did take Eli Manning 4 years later as the number one overall pick (after sending Philip Rivers to the San Diego Chargers because Manning did not want to play for San Diego), and Manning won two Super Bowls as a Giant, both against Tom Brady no less.

I hope that this is just all a bit and Scottie is really committed. Dude is lobbing up some of the worst takes off all time. twitter.com/thenbacentral/…
Scottie Pippen says it’s ‘hard’ to call Tom Brady greatest football player ever

“Is he playing on every side of the football? Is he on kickoff? Is he on the punt return? Because if he ain’t playing all the roles, then he gotta give credit to his team.”

Scottie Pippen says it’s ‘hard’ to call Tom Brady greatest football player ever“Is he playing on every side of the football? Is he on kickoff? Is he on the punt return? Because if he ain’t playing all the roles, then he gotta give credit to his team.”ahnfiredigital.com/nfl/tampa-bay-…

I hope that this is just all a bit and Scottie is really committed. Dude is lobbing up some of the worst takes off all time. twitter.com/thenbacentral/…

However, it’s hard to argue that the Giants could have rostered the best quarterback of all time. Brady’s most recent Super Bowl victory with the Tampa Bay Buccaneers does provide some evidence that he can succeed outside of Bill Belichick and the Patriots system.

Why The Undertaker threw a chair backstage