Tyson Fury is one of the top pound-for-pound boxers on the planet and has gained that esteem with a somewhat unassuming physique. In a division of physical monsters like Deontay Wilder and Anthony Joshua, Fury has always stood out appearance wise, even simply dubbing himself “a fat man”. However, that may change if he’s serious about getting into shape after a recent encounter.

Fury met with former strongman competitor Thor Bjornsson earlier in the week. The two men had a lengthy conversation about workout techniques, and also compared their bodies. Fury jokingly compared his abdominal region to Bjornsson’s. ‘The Gyspy King’ then invited Bjornsson to his camp to help him prep for his next fight.

Watch the full meeting between Tyson Fury and Thor Bjornsson below: 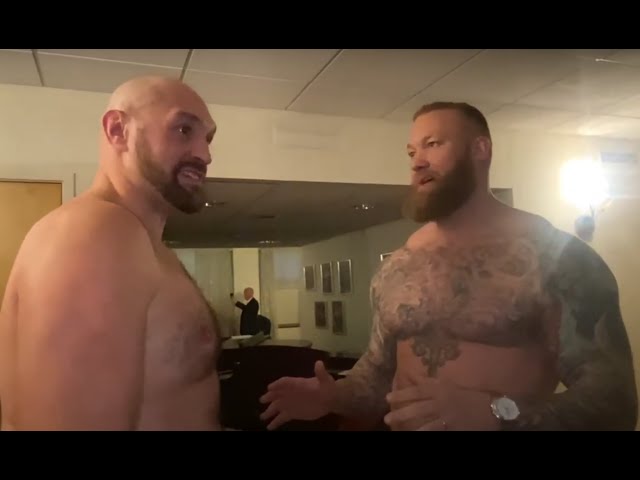 Tyson Fury is coming off a dramatic KO win vs. Deontay Wilder in their October trilogy bout. Meanwhile, Thor Bjornsson has recently taken up boxing and is coming off an exhibition knockout victory over Devon Larratt in September.

Tyson Fury and Thor Bjornsson are set for big fights in 2022 if everything goes to plan. ‘The Gyspy King’ was recently ordered by the WBC to defend his heavyweight crown against current interim WBC champion Dillian Whyte.

The bout is currently ordered for spring 2022, which comes as a bit of a surprise. Whyte was originally set to face former Fury opponent Otto Wallin in late October, but pulled out due to injury. After pulling out of the Wallin fight the 33-year-old set his sights on Fury, and it appears his gamble has paid off.

Meanwhile, Thor Bjornsson is currently attempting his crossover into boxing. Bjornsson has taken things slowly with three exhibition bouts in 2021. The towering Iceland native holds one win and two draws in those contests.

The towering Iceland native was set to face training partner Eddie Hall this past September. Hall had to pull out due to injury. As of now, their proposed fight isn’t rescheduled, though it is rumored to take place in 2022. The fight was first announced in 2020, and will hopefully be settled within the next calendar year.

Archery boost to India, Asian Games to have 10 events, including individual compound categories