Kamaru Usman gave props to Colby Covington for managing to take him down in the third frame of their grueling UFC 268 fight.

Covington, a former NCAA Division 1 wrestler, attempted 11 takedowns over the course of 25 minutes. While Usman stuffed the majority of them, it did seem like Covington got the better of him once in the third round.

Speaking to Laura Sanko after the fight, Usman accepted Covington was successful in one of his takedown attempts:

Sanko informed Usman that the UFC 268 commentary team had a disagreement over the topic. Daniel Cormier was the one who claimed that Covington successfully took the champion down.

Usman responded that he will have to have a closer look at the footage. He also acknowledged that Covington did a phenomenal job to make Usman’s 100% takedown defense record a subject of debate:

“It was close. It was close. I gotta go back and watch the tape, but it was damn close. Gotta give him the credit for even getting there. Most can’t even get there and he got close.” 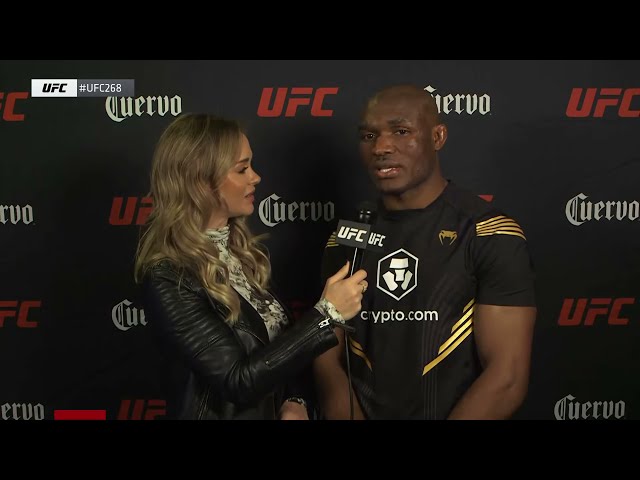 Usman won the much-anticipated rematch against Covington via unanimous decision. The three judges scored the contest 48-47, 48-47, 49-46 in his favour.

Per UFC’s official stats, Kamaru Usman is still the only fighter in the promotion with a 100% takedown defense record. ‘The Nigerian Nightmare’ sits at the top of the list, followed by the likes of Jon Jones and Eddie Wineland, who have 95% and 93.3% takedown defense rates, respectively.

Usman has now defended his belt for the fifth consecutive time. Undefeated since 2013, he also boasts a 15-fight win streak in the UFC. The Nigeria-born star is only one win away from equalling Anderson Silva‘s record for longest win streak in the promotion’s history.